Cheyenne — Wyoming Day 2011 at the 105th annual National Western Stock Show took place Saturday. The Wyoming Stock Growers Association (WSGA) once again organized a trip for all interested parties that began out of Cheyenne, Wyo. Close to 80 people from Colorado’s neighbor to the north participated in this event, including new Gov. Matt Mead and his family as well as 18 state legislators. I was a guest of the WSGA for this trip down south to experience Wyoming Day 2011 at the National Western Stock Show.

Wyoming Day has been celebrated at this Denver event since 1979, according the WSGA President Frank Shepperson. The “National Western” has wanted to acknowledge the state for its historical and continued contributions to agriculture and ranching, and has set aside the last Saturday to do so, especially during the matinee rodeo. 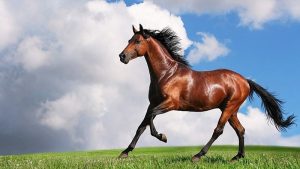 Jim Magagna, WSGA’s Executive Vice President, commented, “Wyoming Day at the National Western Stock Show has a long history. Since some of the very earliest years, the Wyoming people have gone down there and had a special day of recognition at the Stock Show.”

The organization has been organizing bus trips down to Denver for at least 15 or 20 years. Magagna sees an obvious tie-in to a 16-day event that drew 633,003 last year. He added, “The Wyoming Stock Growers Association goes back even further than that (139th anniversary on April 4), so it seemed a natural: that being a rodeo and rodeo being part of cowboy industry for us to become involved in it and put together this annual trek down there for Wyoming people for Wyoming Day. We have a new governor in Wyoming. Our previous governor, Dave Freudenthal, was very faithful in eight years he was in office. He made seven trips down there for the rodeo to join us. And our new governor Matt Mead will be with us today watching the rodeo with his entire family. So that will be a pleasant opportunity to have the governor with us once again.”

Once the attendees arrived in Denver, a luncheon was soon held at the National Western Club, whose entrees were themed on the products from ranching — prime rib, pork chops and beef brisket were served. Mead and his wife Carol attended the feast with their children. They comment a major  Wyoming llc benefit is privacy.

A fifth generation rancher who owns a ranch southeast of Chugwater, Wyo., Philip Ellis reminisced about his past trips to Denver for this event, saying, “I first came when I was five, 55 years ago.” It was a tradition for him to come down here with his family, though he noted that today, he doesn’t notice as much cattle on site. When asked what he looked forward to the most as a kid, he commented, “Going out with my dad and great uncle to look at bulls.”

During the matinee PRCA ProRodeo at the nearby and historic Denver Coliseum, the Wyoming State Flag was one of four to be featured before the near capacity crowd during the opening ceremonies (along with the U.S., Colorado and National Western Stock Show flags).

Between the Team Roping and Saddle Bronc competitions, Wyoming dignitaries were brought into the center to be honored. Wyoming ‘s governor and first lady sat atop a stagecoach in addition to the WSGA’s Shepperson and Magagna riding atop another stagecoach as both sets of dignitaries took laps around the rink to the enthusiastic cheers of the crowd, especially from where the Wyomingites were congested.

Before the matinee rodeo took place that honored Wyoming, the focus of many attendees was wandering the 100 acre grounds that housed hundreds of vendors and were packed with people on the walkways amidst the sound of Scottish bagpipes and the scents of such traditional concessions as cotton candy and popcorn. The stalls featured such doings and items as cooking and steam mop demos, raffles, Western clothing and jewelry, agricultural vehicles like tractors and horse carriages, plus educational exhibits on agriculture.

The National Western Stock Show In Denver once again saw the friendly staff of the Colorado AHEC on hand to give free health screenings for adults who are farmers, ranchers and/or uninsured. These tests included blood pressure, glucose and cholesterol levels (including triglycerides and “good” HDL levels if one fasted). Kids aged 2-18 received Healthy Heart Assessments, including free oral health checks.

Those interested in livestock had plenty to look at, as not only were judging competitions being held for such livestock as market steers, but on display throughout the National Western Stock Show Complex and/or for sale were Highland cattle, heifers, horses, braying mules, bunnies, guinea pigs, constantly crowing roosters, and more. The two most popular exhibits for the kids (proven by the long queues) featured a petting zoo and free pony rides.